The majority of existing athletic courts in the United States are constructed of asphalt. The original thickness was probably 3″ to 4″. Often cracks developed in an asphalt court after several years. These cracks may be caused by localized sub-base weakness or simply the change in temperature cycles that occur every season. Whatever the reason for the cracks, rain water penetrates the cracks and undermines the sub-base. Freeze-thaw conditions also aggravate the situation. At this point, repairs are usually required. It is very common to resurface the entire asphalt court with another two to four inches of new asphalt. This means a new playing surface and marking is required. After several years, the cracks begin to reappear.

A good sub-base is important for any athletic court whether it is constructed of clay, asphalt, or concrete. We certainly do not want to minimize the importance of a good sub-base. However, we can say that when a post-tensioned concrete athletic court is constructed, the effect of any defects in sub-base preparation is minimized. This is because small weak areas in the sub-base can and will be spanned by the prestressed concrete slab to a greater extent than alternative type courts. The recommended two layers of vapor barrier under the concrete also keeps weak areas of the sub-base from getting worse. Another helpful detail is the one-foot-deep-by-one-foot-wide concrete footing around the perimeter of a single athletic court or multiple courts which also strengthens the court(s) at the edges where the sub-base is the most vulnerable to weakness.

A large percentage of the post-tension cables that we supply to athletic court contractors are used in concrete overlays of failed asphalt courts. Concrete is recognized by everyone in the construction industry as tough, durable material that is widely used for many applications. Reinforced concrete or prestressed concrete is a structural element where asphalt is a coating with no structural strength. Because of the superior structural characteristics of concrete, it should be no surprise that concrete athletic courts and playgrounds are stronger, more durable, and require less maintenance than asphalt courts.

Once the decision is made to construct a concrete overlay or a new concrete court, there are many advantages to use prestress reinforcement rather than conventional rebar and/or mesh reinforcement. Another excellent reason is that the post-tensioned concrete court needs joints only between multiple courts or at the net line. It is important to realize that these joints are not expansion joints but rather are crack joints. These joints are usually metal key way. The prestressed cables go through the key way and when properly stressed, keep the concrete crack closed against the key way.

It is our opinion that good drainage away from the athletic courts is extremely important for post-tensioned concrete court(s), asphalt, or any other type of court. Based on our experience of over 20,000 concrete foundations including single family homes, apartments, metal buildings and tennis courts, good drainage is the most important detail. Proper drainage is even more important than good sub-base preparation.

We do know that the initial cost is not the only cost that should be considered. The recurring cost of maintenance, service life, and appearance has to be considered to properly evaluate the system.

Many athletic court contractors believe that the best value for the customer lies with post-tensioned concrete instead of asphalt. These contractors know the value of a satisfied customer and appreciate the reduced number of call backs for maintenance. The fact that we have more athletic court contractors that construct post-tensioned concrete courts almost exclusively speaks volume about the value of our system. Most of the contractors that install large numbers of post-tensioned concrete courts do much of the work with their own forces. They send 3 or 4 men to the job site with a tractor and forming lumber. They scrape the site, bring in sand fill to get the site to grade from the courts, and install the cables and key way. An experienced concrete finisher follows and pours the concrete. The courts are covered and cured. Please note that curing compounds should not be used as they will not allow the playing surface to bond. Approximately seven days after pouring, the forms are wrecked and the cables are stressed to the proper tension.

One big advantage to this procedure is that the contractor controls the quality of the concrete and the installation. With asphalt, the quality varies and the ambient temperatures and weather are a much more significant factor.

By monitoring the curing strength, it is not uncommon to provide a portion of the prestress approximately 18 to 24 hours after the placement of the concrete. Once this partial stressing is applied, the slab cures under a compressive force which improves its modulus of ruptures and flexural characteristics. By early partial stressing, the potential for crack formation is greatly reduced, and in most cases eliminated.

Quality control of the post-tensioning process is achieved by independent recordation of the actual stressing procedure. By measuring the amount of tendon stretch and by using calibrated equipment, it is easy to document the stressing procedure insuring that the slab is properly tensioned.

Post-tensioned concrete athletic courts are considered by many contractors to be “State-of-the-Art” due to the superior performance and longevity. They can be constructed easily and quickly with readily available materials. The post-tension tendons can be placed by semiskilled personnel in only a few hours. Most tendon suppliers will also provide stressing equipment, technical assistance, as well as other various services.

VIEW SOME OF OUR LOCATIONS OF WORK 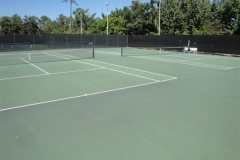 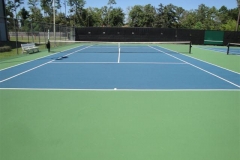 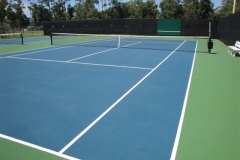 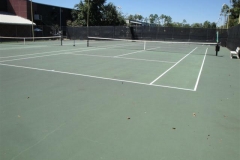 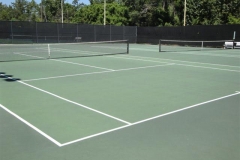